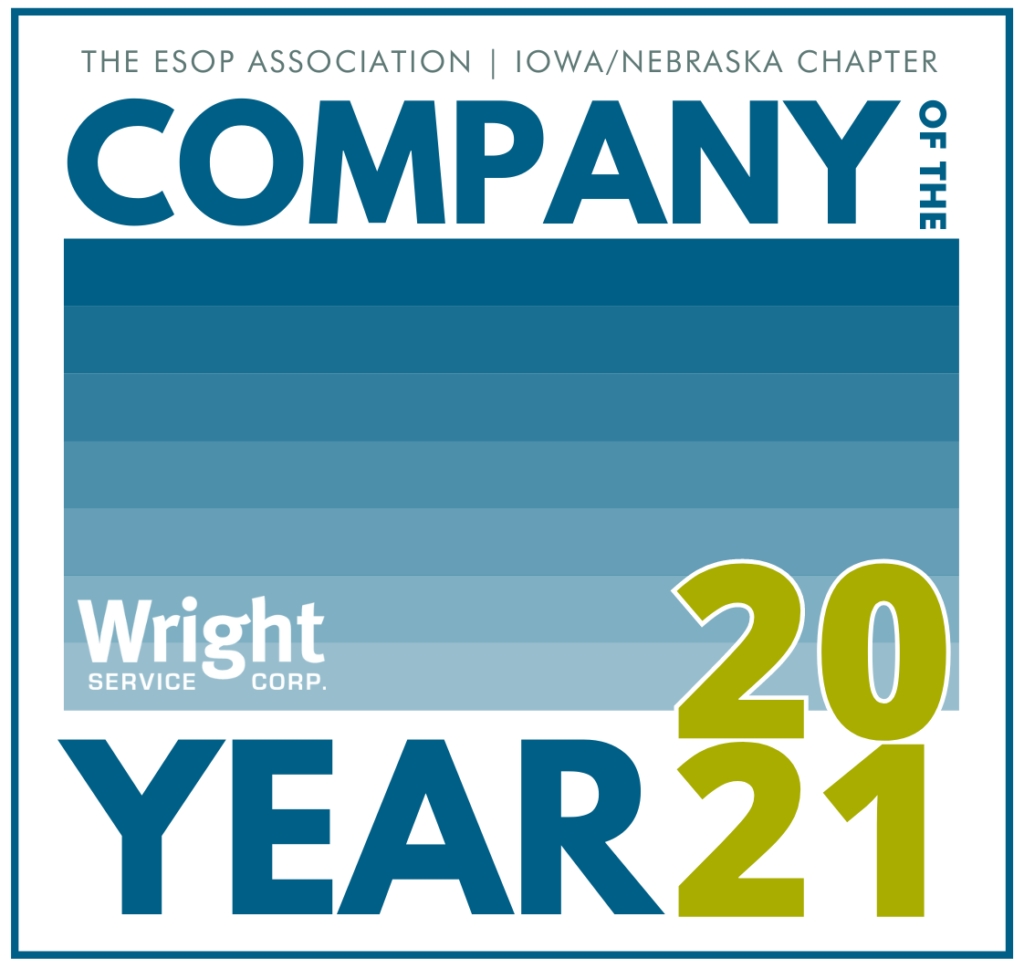 The Iowa/Nebraska Chapter of The Employee Stock Ownership Plan Association recognized Wright Service Corp. as the 2021 Company of the Year at its Annual Spring Conference, held virtually. The ESOP Company of the Year award is presented to a company that demonstrates a commitment to employee ownership, as exhibited by involvement with the Association and its programs, clear communication with employees, and its commitment to the Association’s vision of endorsing employee participation, wealth creation, and individual dignity and worth.

Of the more than 130 employee-owned companies in the Iowa/Nebraska chapter, three finalists were selected. Wright Service Corp. was awarded the high honor. To be considered for the honor, the company had to submit answers to questions regarding how the value of the ESOP has been maximized to benefit employee-owners, ownership education, chapter, and national involvement, and more.

As Wright Service Corp.’s headquarters is located in West Des Moines, Iowa, we were eligible for the Iowa/Nebraska chapter award. With this recognition, Wright Service Corp. was 1 of the 18 companies considered for the National ESOP Company of the Year. Therefore, this will be announced at the Annual ESOP Conference later this year.

We would not have been recognized if it wasn’t for the commitment of each employee to our family of companies. They live out our core values of safety, excellence, teamwork, integrity, innovation, and family.

Wright Service Corp. has been employee-owned since 2002, and 100% employee-owned since 2006. The Employee Ownership Committee, formed in 2014, is currently made up of 15 members from various areas of the company. The committee’s mission is to contribute to the success of our family of companies by advancing and strengthening our culture of ownership through education and communication.

In the past year, many challenges were faced by all. The Committee was able to transition many of our traditional in-person events into virtual ones. They used the “new” virtual space to expand our reach to a larger audience. We saw a large jump in participation in submissions for Employee Owner of the Year, Poster Competition, and Guess the Value. For the first time, we had a live broadcast to reveal the 2020 share price. A field outreach group was formed to improve engagement and outreach across our family of companies.

The ESOP Company of the Year Award honors a corporate member of The ESOP Association that demonstrates a steadfast commitment to employee ownership through its participation in Association programs, its efforts to communicate with employees, and its dedication to realizing The Association’s vision of employee participation, wealth creation, and individual dignity and worth. In 2021, 5 nominated companies were finalists. Nominations were reviewed by the Executive Committee of TEA’s State and Regional Chapter Council. The award was announced at TEA’s National Conference, held in Washington, DC from June 21-23. Wright Service Corp. was 1 of 18 companies considered and was selected to be one of the five finalists.

ABOUT THE ESOP ASSOCIATION

The ESOP Association is the only organization that advocates on behalf of all ESOP companies. Dedicated to education, The ESOP Association attracts more than 10,000 people annually to its 18 chapters and 5 national meetings. Its mission is to educate about and advocate for employee ownership with an emphasis on ESOPs. For more information on the Association, visit www.esopassociation.org.